I don’t wander  through the entire VIP section at  Cavs games, I get my seat and down my bootie goes. Only place I do wander  to is the salad station, lol, and the ladies room. Last night, Friday, me and my hubby sat in a different area than normal and OMG, there was ELMORE SMITH!! All the games I have been too, and I never voyaged on that side of VIP, sigh. I was so excited to hear what Mr. Smith had to say about when he played with the Cavs. It was great to talk about the Coliseum, which was the home of the Cavs  for  20 years. 1994 was the last year of that 20. As for me, 5th grade through 12th grade, I attended soooo many games. The Coliseum was a stone throw from my parents backyard. It was a real treat to meet and speak with Mr. Smith, I love basketball! I just wish all my sons were with me…next time!! 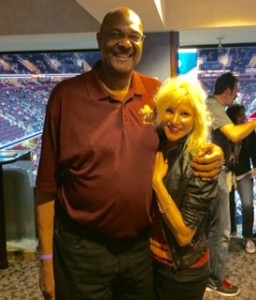 ELMORE SMITH FUN FACTS – In his first season, Smith averaged 17.3 points per game and 15.2 rebounds per game and was named to the NBA All-Rookie Team. His rebounding average for that season is the eighth-highest ever recorded by an NBA rookie. AND on Oct. 28, 1973, the 7-foot Smith swatted away 17 in all, setting a single-game NBA record that still stands. Imagine being a fan that day in the stands

ENJOY YOUR WEEKEND, I will see you on Monday, April 4th, with a new healthy recipe!

Do you have a FITBIT , let’s step together ! Just send me an invite: greatdaymom@aol.com

Click on over to my YouTube page for more healthy recipes along with some fat burning moves to do at home.